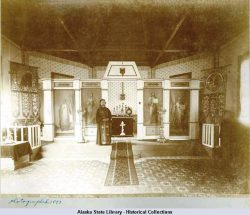 The History of St. Nicholas Church

When St Nicholas was founded in 1894, there were no Russians in Juneau, and Alaska had been under United States control since  it purchased Alaska from Russia in “Seward’s Folly” on March 30, 1867, the Russian Orthodox Church of St Nicholas was established here in 1894.  Many tourists who visit our Church during the summer months are surprised to learn that it was the native Tlingit people who were the catalyst for the establishment of our Church! In neighboring Sitka and in the village of Killisnoo, a great majority of the Tlingit had embraced Eastern Orthodox Christianity during the Russian period (1741-1867).  In about 1892, some of the Auk Bay Tlingit, living just a few miles north of Juneau, had visited Sitka and were baptized there.  In Sitka, the Tlingit had their own Orthodox chapel where the services were conducted in their own language. In contrast to this, many American missionaries were under strict instructions from their own church authorities and the United States government to avoid the use of the native languages and customs, and to insist on the use of the English language.  To many of these missionaries, the Eastern Orthodox Church in Alaska seemed no better than the native peoples’ original pagan religions. Partly as a result of this restrictive policy, many more traditional Tlingits in the Juneau area gravitated toward the Orthodox Church, where local languages had been used in worship since about 1800 in Kodiak, and 1824 in the Aleutian Islands.  The church in Juneau became strongly established through the efforts and initiative of local Tlingit leaders. In 1890 Taku leader Anathahash went to Sitka to be baptized. The Rev. Father Vladimir Donskoy returned with him to Juneau and was the first priest to conduct church services. During his stay he instructed and baptized many of the local Tlingit people and supervised the construction of the church building. This same year saw also the conversion of Alexei Yaakwaan, son of a Tlingit leader. He encouraged his father, Yees Gaanaalx, leader of the L’eeneidi (Dog Salmon) people of Auk Bay to become baptized. Through Sitka Chief Khlantych, the church was informed that Yees Gaanaalx was intent on embracing Orthodoxy and that many would follow his example.

The Visit of Saint Nicholas to the Tlingit Elders

In 1892, on July 26, Bishop NIKOLAI (Ziorov), Bishop of the Aleutian Islands and Alaska 1891-1898, visited Juneau from San Francisco where the seat of the church in America had been transferred in 1872. The bishop was met by the Tlingit leaders who were eager to embrace the Orthodox faith. According to oral tradition, he was told the following. The Tlingit leaders had been experiencing a common, reoccurring dream.  In their dream, a short, white-bearded, elderly man encouraged them to become Christian. When these leaders saw an icon of St Nicholas the Wonderworker, Archbishop of Myra in Lycia, they all recognized him as being the man in their dreams. Three days later, the Priest-monk Mitrofan baptized both Yees Gaanaalx and his wife giving them the names of Dimitri and Elizabeth. Following their example some 700 Tlingit came forward to embrace the Orthodox Christian faith.

Establishing a Community – With Gifts from Russia!

On November 21, 1869, His Imperial Majesty, Tsar Alexander II granted approval for the establishment of the Orthodox Missionary Society. The Society was the fruit of the labor and vision of none other than the then Metropolitan of Moscow, St Innocent (Veniaminov).  The purpose of the Society was simple.  It was to provide the means, both financial and practical, for the spread of the Gospel and the support of missions, especially in the American diocese. The new Orthodox community in Juneau was to benefit from the benevolence of the Society. After word reached Moscow that the work in Juneau had been established, the Society sent architectural drawings and two thousand silver rubles to build and equip the church.  Another significant donation of 400 dollars came from Rev. Ivan Il’ich Sergiyev, known better to us as St. John of Kronstadt. The Iconostasis was constructed and provided by Ivan A. Zheverzheev’s Factory and Store of Church Utensils. Also included in the shipment were articles of interior church furnishings – candle stands, chalice set, censer, banners, a full icon screen and festal icons. Many of these items can still be seen (and some are still in use) at the Church today.

A Unique Building for a Unique Mission

Contrary to some sources that we have seen. St Nicholas was not a modular building shipped from Russia. Our building was constructed in 1893-1894 in Juneau with local timber, local labor, and under the supervision of Ellingen and Rudolph, a local contractor. A local construction firm was employed to supervise the construction, and the labor was provided by many of the new Orthodox Natives and  a number of Serbian gold miners living in the Juneau area.  The architectural plans, funds for construction, the interior furnishings (including the icon screen), and the six large icons at the front of the church were shipped from Russia. The iconostasis was assembled and placed prior to the building’s consecration. The iconostasis is the only architectural piece of our Church building that was made in Russia. The building of the church was not only of interest to the local Native Alaskans, but caught the imagination of the local American populace as well.  In October 1893, a fundraising event was sponsored by a local Juneau physician. A total of $400 was raised at a “fancy dress ball” at the Court House where participants competed for prizes, danced to orchestral music, and ate ice cream.

A Warship and a Bishop

In June 1894, the USS Pinta sailed into Juneau. By order of the US War Department, the commander of the Pinta was to call in at Sitka and take aboard the Bishop of the Aleutians and Alaska, His Grace NIKOLAI and party, and transport them to Juneau for the purpose of the consecration of the altar and church of St Nicholas.  Along with the consecration of the new Church, the first resident priest, Father John Bartnovsky, was ordained during the hierarchical Divine Liturgy on June 24. At the time of the consecration, there was no dome or belfry in place on the building. The characteristic “onion” dome was constructed and placed in 1895, and the bell and belfry were constructed and placed in 1905 or 1906.  Inscriptions on the bell indicate that it was cast in St. Petersburg, Russia, and the Orthodox Messenger tells us that the bell was donated by Aleut parishioners on St. Paul Island. Since 1894, the church has been in continuous use serving the Orthodox faithful of Juneau and the surrounding areas. St. Nicholas church has the distinction of being the oldest, continual use Orthodox structure in Southeast Alaska.
Follow Us
Facebook-f
Youtube
Scroll to top